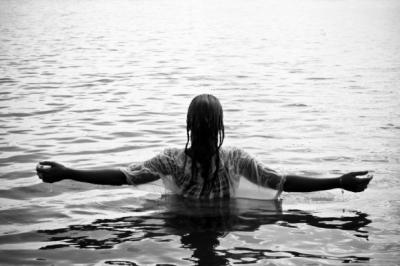 I had an incredibly interesting weekend last weekend. And I suppose this post is a part of my processing it.

The weekend began on Saturday morning, where I was busy running around getting the little things taken care of for a seminar for the worship team at my church. After the seminar, my fiancé and I went for a fairly long walk where we talked about what felt like everything. We came back to my house and planned out the rest of our weekend. I was going to need to rehearse my sermon while she was going to continue her job search. That was, until I got a message that said I needed to be at the nearby (45 minutes away) hospital right away.

Something terrible had happened. I knew someone young had passed away, but the details were lost on me. Everything in between leaving my house and walking in the room with the family was a blur, because of what I walked into, in the room.

There in the most private, intimate room the ER could spare, was a parent mourning the loss of their seven-week old child. It was a moment that I was admittedly unprepared for. I can’t tell you what my immediate thoughts were, primarily because it’s uncouth of a preacher to use that kind of language. Suffice it to say, I was at a loss.

I talked with the family a bit, offered a prayer, and continued to try and offer whatever support I could. The really hard moment came when it was just the parents and I in that room alone. It was a quiet, intimate, and painful moment. Meanwhile, their youngest child, a two year old, was outside crying, as toddlers do. The juxtaposition between stillness and young energy was tragic, ironic, and painful. Just on the other side of the door, a young boy was scampering around, oblivious to the tragedy that had befallen his family. Yet he still cried.

The next morning, I preached, doing everything I could to focus on my sermon. And it almost worked. Almost. As I neared the end, my emotions began to betray me, but the sermon wrapped up, and church ended well.

That evening, my fiancé and I went to a nearby churches special worship service. While we were there, we bore witness to twenty-five people being baptized into the Spirit and the church. It was a beautiful moment. It was a painful moment. As I watched everyone go into the water, young and old, the symbolism of death a resurrection reverberated around me. With each person that went into the water, I was challenged to celebrate and rejoice.

I learned a long time ago that my default stage of grief is anger. Grief anger feels different than frustration at stubbing your toe, or getting cut off in traffic. Anger from grief is the kind that makes you want to shout till it hurts, smash walls with hammers, then shout till it hurts again. It’s the kind of anger that exhausts you and keeps you up at night.

And it showed up.

I was punchy with my fiancé, who was incredibly gracious in the midst of it all. I was angry at the worship service, for daring me to rejoice when I had just been helping two parents say goodbye to their infant child twenty-four hours prior. I was angry that the theological answer to why ‘bad things happen to good people’ never works in moments like that.

I’ve since reached the other side of that initial anger, and while I expect it to swell up again, I am, for the moment, calmed down. I don’t intend to challenge orthodox Christianity, nor rewrite systematic theology. In good conscious, I must admit that I am still very emotional about the event. But I feel safe in saying that the most sacramental event of my weekend was not witnessing twenty-five people confess Christ as Lord before God and man.

The most sacramental moment was in that hospital room. For in the midst of pain, suffering, bewilderment, and anger, God has not abandoned us. The silence we hear from God is not God’s unwillingness to answer us when we shout ‘Why!?’ to the heavens. The silence we hear is because God is, in that very moment and space, weeping with us, unable to speak.

Sometimes we are baptized in pools on stages, with bands and crowds.

Sometimes we are baptized with tears in quiet hospital rooms.

5 thoughts on “Baptized by tears…”

Let me know your thoughts down below. Cancel reply