One of the most iconic movies of my generation is ‘The Karate Kid’. It’s not just a good martial arts movie; it’s just a great film. The film shows us the life of Daniel, who is a kid who finds himself in a new high school, which comes with a new breed a bullies. Daniel’s situation grows so bad that the maintenance man of his apartment complex, Mr Miyagi, offers to take Daniel-san under his wing and train him in karate.

Daniel shows up excited to learn. His excitement quickly dissipates when he finds out that his training will begin after he does some chores. Daniel’s would-be mentor has him sand his back deck, wash and wax his car, and paint his fence. After three days of hard work and no training, Daniel has had enough. He confronts Mr Miyagi about the lack of training. Just as Daniel is about to walk away from everything, the wise old mentor asks Daniel to do all of the motions that he had over the last three days; painting the fence, sanding the floor, and famously wax on, wax off. With little warning, Mr Miyagi begins to throws kicks and punches at Daniel-san, who instinctively begins to throw near perfect blocks, deflecting the attacks.

Turns out, he had been training this whole time.

I think God is a lot like Mr Miyagi some times. END_OF_DOCUMENT_TOKEN_TO_BE_REPLACED

A few weeks ago, I snuck away to watch a movie on my sabbath. While I was there, the mall lost power, thus ending the movie a bit too early. Joe was none too happy about it, so I left quickly after getting my rain check from the theater. On my way home, I found out that the whole section of town lost power, and the police were scrambling to direct traffic. It made me realize something; as a pastor, I am a lot like a traffic cop.

They’re just waiting on me to direct them where to go and what to do.

Here are a few reasons why ministry is a lot like directing traffic: END_OF_DOCUMENT_TOKEN_TO_BE_REPLACED

Today, you are you. That is truer than true! There is no one alive who is you-er than you!

Earlier this year I had to interview with an office of my churches denomination in order to become an official Army chaplain. We came to an interesting point in the conversation that I doubt I will ever forget, because of just how perfectly (and bluntly) an observation about me was said. I was asked about my personality type (Meyers-Briggs; I’m an ENFP), to which I said there was really only one area I was uncertain of (the ‘P’). What follows is as close to a direct quote as I can recall:

“You’re definitely a ‘P’. You have a trailed of broken and missed deadlines behind you”. 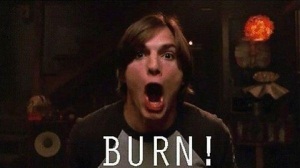 He wasn’t being mean. He was just being honest. I had just never heard it put that way. And oh man, was he right.